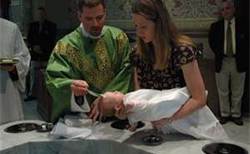 In essence, the sacrament of baptism is the sacrament by which one becomes a Christian. The origin of the word is from the Greek “baptein,” to dip, or immerse.

According to Saint Paul, baptism comprises three elements: baptism establishes a vital union with Christ in the saving events of His life, His death and His resurrection; baptism involves the reception of the Holy Spirit; baptism establishes the body of Christ, the assembly of the Christians.

The New Testament does not provide a precise ritual for the celebration of baptism. The only constant element is water (e.g., Acts 8:36-38).

The Christians gradually developed their baptismal rituals. At the end of the first century, baptism was performed in “living water,” (i.e. streams or rivers). The preferred manner of baptizing was through immersion, although pouring was also accepted.

By the late third and early fourth centuries, the ritual for baptizing was very much established. The great baptisteries of Northern Africa and Southern Europe are testimonies to the importance both of the rite and the sacrament in the life of the Church. The ritual involved immersion in lots of water and anointing with oil.

The sixth and seventh centuries brought the decline in the ritual as it gradually became privatized and minimized. The baptism of children became the norm and the amount of water that was reduced to a minimum.

The second Vatican Council returned to the great baptismal period of the Church (third-fourth centuries) and reintroduced the traditional ritual for baptism with immersion. In addition, baptism of adults again became the norm after which infant baptism was modeled.

BAPTISMS: Celebrated the first and second Sundays of the month after the 12:30 p. m. mass and the fourth Sunday of the month during the 12:30 p. m. mass. Please call Sr. Margaret to arrange for an appointment before attending the Baptism workshop. The godparents must be practicing Catholics and attend Mass and should give a good example to their godchild. They must be fully initiated, that  means they must have  received the Sacraments of Baptism, First Communion and Confirmation. The godparents can be single, but if they are married, they must be married in the Catholic Church. Children who are first grade and older must attend Religious Education classes to prepare for baptism.